“How do we talk about Kanye West?” Jeen-Yuhs is not asking us to dissect Kanye West’s actions that make him a larger-than-life presence in the zeitgeist. If it did, we’d finally understand that his comments about being a GOD spoke to his inflated ego stemming from influencing and repurposing past trends like shutter shades. It’s asking to go on this journey with Clarence “Coodie” Simmons as he witnesses Kanye’s highs and lows – it asks us to endure an emotionally stressful journey through the eyes of his brother.

Coodie introduces us to Kanye West and himself, as he describes a kind of kinship that came together through spiritual fortitude when the two crossed paths at a Jermaine Dupree party in Chicago before Kanye’s move to New York City. Coodie got contracted by Kanye to follow him on this excursion and document his journey to ascend to a hierarchy of rap greats. He also went because these two were brothers. The two met in 1998, Coodie was 24, and Kanye was around 17; the kind of brotherhood that makes the documentary a tough watch as it details their eventual disconnection. However, through Kanye’s highs, we are shown the hustle that led him to create some of the most influential music over the past decade. Many of these highs come from seeing his creative side and his time with his mother, Donda West, who guided him throughout his journey – made evident by every moment of this documentary, where Donda is the real Hero.

Throughout this time, we’ve been growing with and realizing the kind of person Kanye West is. His personality is unfiltered and often lacking tact and grace. His outbursts have been the cause of great controversy, like the time he claimed “slavery was a choice.” But Kanye is arrogant; he always has been, but it’s Donda West’s passing that swayed his always not giving a fuck attitude and further allowing him to become a pain in the pop zeitgeist echo chamber. As Coodie Simmons would describe, there was a shift in character. Kanye West wouldn’t bother giving him the attention or love you’d expect between these two, especially after everything they endured. Jeen-Yuhs wants to give us a perspective about his diversion into an oblique obsession with finding himself, whether as a creator or human being who has fallen off the beaten path. Co-directors Coodie & Chike direct his path with a proper vision, giving us two potential meanings; and it all reads as an open letter to Ye, from the people who used to know him.

We are given a proper introduction and reflection of youth with the time to keep growing and fighting adversity since the idea of rapping in front of a famous rapper to get attention has become taboo with the growth of the internet. But as we revert to the past, there were few ways to get a deal and sell records – keeping that in mind, Jeen-Yuhs documents scenes like Kanye rapping “All Falls Down” inside Roc-A-Fella records with a degree of nuance, that when reflecting on the length between this and his chaining day, it gives us a demoralizing sadness; we want this Kanye to succeed, but hate that the success allows him to spread his rhetoric today. His stagnant speaking patterns as he tries to form a proper clear idea were never new, but his inflections were different – referring back to early 2007 at Dr. Donda West Foundation fundraiser.

As Coodie & Chike approach their subject with care, they never mislead our emotions, and they allow these moments to speak for themselves. In a scene in Act 2, Kanye is being interviewed by MTV alongside Sean “P. Diddy” Combs, and during, he acts like a free-spirited kid slurring his words trying to maintain his excitement. Kanye isn’t a kid anymore. He isn’t having the best time celebrating Grammy wins and messing around with his friends and family. It’s what made this connectivity and fanning from Kanye as artists like Scarface, Ludacris, and more give him his flowers more palpable. But as he tries to tone down the ego and act humbled, the documentary begins to play it like harbingers of doom, giving us warning about where his life is heading. It never steers you in a different direction, allowing for you to continuously sense their connection, even when they were around each other for 6-7 years; though, nothing felt more in line with that than the early recording sessions for The College Dropout.

One scene, in particular, struck that chord perfectly, confining us into two truths. In it, Kanye was playing music for Pharrell – Pharrell had to stop himself before gushing about the constructional ingenuity of the song, though a few words stood out: “Keep that same perspective, still keep the same hunger …” and about his gift: “Don’t become complacent as an artist.” Unfortunately, that essence seeps out when we see Kanye winning a Grammy. In his speech, Kanye makes a half-joke threat of an arsenal of words he could have said if he didn’t win, but he won and chose not to tell the audience. Kanye’s win beautifully reflects the hunger and joy coming hand-in-hand with tremendous effect.

But Kanye has grown in the opposite direction of what some may have assumed – arrogance was one thing, but MAGA hats and support of Donald Trump took it to another level. There is a scene in Act 3 where Kanye, his driver, and Coodie are in the car, and Kanye is watching a YouTube recap of Tucker Carlson belittling and applauding his rally – it was 2020, and it fits the narrative pull for that side of the political spectrum. Kanye’s reaction to it was very telling of his character, specifically, his narcissistic side as his mood shifts when Tucker speaks slightly highly of him. It’s instances like these that bring us closer to Coodie’s shoes and we try to understand his crisis as Kanye’s brother.

Each part is like a ticking timebomb waiting for it to explode with a shot of a pivotal moment in Kanye’s artistic growth. Act 1 treads lightly to paint the canvas with an array of bright colors, only to receive a light black overcoat for contrast. It contrasts the 180-spin Kanye took as a person, becoming who artists try not to be: complacent. These reflections hold true as we trickle down past his balanced himself. In Act 3, as Kanye speaks to a group of investors, he makes slight at his mental health. He notes that he had to take his medications for a normal conversation, which in turn was “turning his alien to English.” These upward and downward spirals, for fans, break the parameters of how it will affect us. Coodie & Chike make interesting edits at the end, albeit keeping a proper focus on an emotionally stunted and lost Kanye without his mother. They make sure to focus on the nuances of the relationship to see how Kanye’s growth has gone, from his erratic behavior to musical creation.

The way Coodie & Chike edit Jeen-Yuhs puts trust in its viewers to find an emotional connection with Kanye’s descent into obscurity. In Act 3, they weave together many of Kanye’s controversial moments as fragmented memories – considering the many – they are broken and distorted because the chemical imbalances due to his mental health and lack of care for help make them feel like faded memories. It gives us a sense of understanding without having to excuse his behavior – this includes his most recent music video where he buries Pete Davidson. Parallel to that, Coodie & Chike edit scenes with Kanye and Donda with delicate care so it can offer some agency to his downward spiral. Every time she walks in the room, a new light shines on Kanye as he becomes his GOOD and authentic self. The music plays with angelic crescendos through the strings, adding a sense of brevity to their relationship. So when Act 3 reaches the turning point – Donda West’s passing – you are left wanting to pause the film and weep for Kanye even though we dislike who he has been, recently.

Coodie Simmons’ closeness to the West family doesn’t hinder his narration since his brotherhood with Kanye would make some skeptical about any bias upon reaching the last 30 minutes. The reflections of this story never derail or mistreat the information it wants you to intake. It benefits Jeen-Yuhs since it doesn’t want to be another run-of-the-mill informative doc without character. It’s unlike other music documentaries, like What We Started. The film brought these ideas into the mix about the evolution and scale of the genre, barely going in-depth and trekking back into a documentary Martin Garrix. The personal relationship between them shows a different perspective of his craft while understanding the human, the superfan, the kid who aspired for greatness, only for it to come crashing down.

Jeen-Yuhs is bereft of light and darkness, and Coodie Simmons & Chike make you aware of that. It’s not trying to place Kanye West on this high ground, where we have to distinguish the artist and his person, with all the complications we read in the news today. It isn’t here to dissect the hard-wired mind open 24/7 with a barrage of highlights from every recording session – we see footage for sessions of Late Registration, Kids See Ghosts, and Jesus is King, briefly. We’re here to understand Kanye through a different set of eyes, especially when Kanye is depressed or at his happiest. They showed us through recording sessions which showed Kanye at his happiest – in 2018, it is creating music with his brothers while unifying this spiritual belief centric on god, but importantly, communal love for all humans. There are two Kanye’s now, and it’s sad to see. However, Jeen-Yuhs reminds us that there is still a spark left inside, and it’s on him to grow and take accountability for himself. 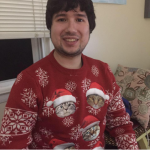