In light of the trials and tribulations this year has provided so plentifully, with seemingly no intention of ending the ride anytime soon, the prospect of another million dollar heavy blockbuster from British-American filmmaker Christopher Nolan being hailed as the white saviour, perhaps not of cinema, but at least the squealing box offices worldwide, could only ever come off as gallows humour; a capitalist wish founded on the fantasy of the masses fasting, thirsting for months to finally be treated again to a demonstration of obscene amounts of money disbursed before their eyes on the silver screen. Its prolonged emergence on the desert horizon of a barren release schedule, and, especially in the most profoundly stricken part of North America, carrying the hopes invested in its potential effect of delivering a death blow to a desolate period of cinema-going: it was only ever bound to fail through no reason of its own, and that is on top of  whatever successes and shortcomings it would boast through its properties as a film. Naturally, this was and always is marketing hubbub that dies a swift death as soon as the actual product is released, evaluated – and often promptly forgotten, to the dismay of those who are responsible for this tired cycle to begin with.

Time moves forward, often with disregard for the longevity of a blockbuster straw fire du jour, but, of course, Nolan’s new CIA action thriller imagines precisely an antidote. Tenet is a film about the possibility of reversing time, and of shooting and orchestrating action (inherently characterised by forward momentum) within the rule set of a reversed time flow. The opening sequence introduces the central players: A group of CIA agents intervene on the ongoing terrorist attack in an opera house, attempting to extract both an informant and a mysterious artifact, quickly identifiable as the MacGuffin of the film going forward. The interception goes awry, the Protagonist (John David Washington playing a character literally called that) is captured by the Russian mercenaries but manages to swallow a fake cyanide pill, waking up on a ship where he is inducted into the Tenet special unit of the CIA. This tumultuous beginning sequence proves symptomatic for the rest of the two-and-a-half-hour runtime: action set pieces alternate with jarringly stitched together, statically staged expository dialogue segments, all wrapped in the tried and true spy thriller formula organised around Bond-like globe-trotting. However, straying severely from its archetypical precursor, Tenet never conveys any sense of its locations, of local colour. It has no time for leisure, let alone for indulging in camp or displaying a hint of self-irony over the course of its over-the-top journey. It does, however, invoke the Cold War conflict by having an embarrassing (and hopefully embarrassed) Kenneth Branagh poorly ape the stereotypical Russian adversary you would come to expect from genre pretexts – although, at this point, it is more than fair, perhaps necessary, to ask for more from your spy fare –, an antagonist who, despite his entanglement in the business of actual time reversal, is still fuelled by envy and bitterness about his wife leaving him, the flavour of pettiness that movie villains specialise in, that is, the kind that has Branagh’s character dramatically stammer the words “Because. If. I. Can’t. Have You. No One. Can.” right into the camera.

Tenet,the title of the film, refers to the Sator Square. In its original form, it is a set of Latin inscriptions arranged in a square formation, historically found in several locations across Europe. Its particular arrangement produces a palindrome readable from every direction. Whereas its meaning, at face value, is a decidedly simple statement about a farmer and his plough, the premise of Nolan’s film posits itself at the other end of the spectrum in terms of modesty. World War III and the world as we know it is at stake, threatened to be destroyed by the total reversal of time. Naturally, as is the wont for these high-octane action thrillers, it is the few ‘in the know’ fighting a war in the shadows while the unassuming masses serve as bodies filling the streets or driving their cars – future collateral damage – on the never-ending straight roads that will see at least one prolonged vehicle wreckage sequence equipped with the set of acrobatics that series like Fast & Furious have set a certain precedent for among blockbusters. Despite its temporal conceit, Tenet hits all these familiar notes, eschewing but very few tropes of the genres, from countdown situations going down to the wire to several instances of talkative hubris allowing for the last-minute disruption of hostage situations. As obsessed as it is with physics, elaborate hypotheticals, and far-reaching conjecture, the immediate consequences for narrative, their bearing on the storytelling itself, remain elusive. Time reversal, ultimately, is rendered a vapid and autotelic gimmick, mined for visual effect but of disappointingly little significance as the film never evolves conceptually what is already established in the first demonstration of its supposed trump card. The result is a very limited amount of chopped up and deliberately spaced out action sequences that fully deserve being exposed as the idealess examples of the genre that they are, engaging with what could have made the film stand out in this particular space to the most limited extent imaginable.

Nolan has done better in the past; with Memento (2000), for instance, where fragmentation of the narrative centrally mirrored an amnesiac’s experience of reality through (failing) memory. Ironically, Memento itself is quickly becoming a distant memory, a memento, foggily recalled, of a director who for the last ten years has shifted his attention to cinematic bombast and whose films seem to inch closer to a possible translation of video game rules and aesthetics onto celluloid. Where Dunkirk (2017) celebrated a Battlefield-like hold-the-line scenario on a grand scale, akin in its artifice and audio-visual self-aggrandisement to a benchmark video for a new graphics card, Tenet fully internalises an action game structure that has been the established genre convention for a long time now, right down to Washington, Pattinson (playing the partner of Protagonist) and friends frequently engaging in very analogous walk-and-talk sections between bouts of action. The medial confluence further extends to the name of (the) Protagonist and his paradoxical characterisation, in equal parts extremely capable and simultaneously looking on in awe at what is happening, with the classical naiveté of a vessel designed to guide a similarly clueless viewer, as well as to the surreal twisting of reality, comparable to the dream-diving of Inception (2010). The film, thus, conjures a sort of virtual reality experience; but one so devoid of life, so unlovingly programmed, an endeavour so utterly humourless, so buttoned up that it makes one miss the immaturity and curiosity of Cronenberg’s eXistenZ (1999).

Honing in further on this issue of exposition, a staple of Nolan’s work for a long time now, and an already infamous criticism for Tenet in particular, the tragedy at the heart of it has to be stated with complete clarity: it comes at the expense of basic filmmaking techniques. Not only due to it being inherently at odds with a ‘show, don’t tell’ ideal, but because even the editing of those scenes gets subsumed here under the principle of the suit-wearing twitchiness that characterises the action part of the Tenet equation. Even basic attempts at shot/reverse-shot in conversations, which, as has been mentioned, easily comprise half of the film, are botched by superfluous cuts and medium two-shots marred by inserted close-ups, yet not botched or marred enough to at least constitute an interesting failure. They simply bore instead, poorly structured and awkwardly rattled off, stuck in a permanent state of confusion, of tentatively oscillating between ‘getting on with it’ or perhaps, maybe, explaining the technicalities properly, after all. Likewise, the sound mix has been met with a significant amount of sneer, with audiences complaining how much of the dialogue is inaudible, drowned out by Ludwig Göransson doing his best Hans Zimmer impression (taking cues particularly from the latter’s work on Blade Runner 2049, 2017). There is little to add to this curious creative decision, if one were to benevolently dub it that, except to say that Godard’s Week End (1967) this is not.

The film offers a mildly positive surprise at the end: it dips its toes into ecocriticism, though regrettably in the vaguest and most inconsequential manner. The wish to change the past may be en vogue these days for a lot of understandable reasons but even Tenet rightly recognises that it is a futile endeavour, to be replaced by future-oriented action. Yet, while there is still hope for us to collectively bring about an ecological turnabout, preventing a future that, like the one in the film, would be keen on destroying its past, Tenet is a self-centred waste of time and money that is irreversible. If such a notion were not silly to begin with, one would be tempted to assign it the moniker of ‘anti-filmmaking’, with no sense for the power that lies in the economy of the image or awareness of the immense exploratory potential the medium is able to afford time and time again.

Instead, we choose to call it impoverished and jejune. Thankfully, we have already moved on. 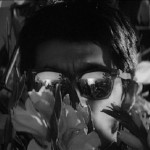