The Silent Film Era was an indelible influence on the decades of cinema that came after, but silent films are also valuable independently of sound films. These films are valuable because they use a cinematic language very different from most sound films. Compared to later films, films produced in the 1920s faced many technical limitations, including the lack of sound; however, this limitation resulted in countless displays of brilliance that would not have been possible if the sound had always been a feature of cinema. Silent cinema is a complete art form in and of itself, and while the advent of sound opened up many new avenues of expression in film, this lack didn’t hinder the greatest silent films.

Artist’s intent is an important factor to take into account in relation to the silent film. While the silent film was the only method filmmakers had at their disposal until well into the 1920s, these filmmakers still created their art without sound and intended audiences to experience it without sound. Silent films are works of art specifically crafted with the lack of sound in mind, so the addition of sound does not necessarily improve a silent film. In this sense, silent films are complete in the same way black and white films are complete: not in spite of their lack of color, but completely independently of that lack. The entire concept of color cinema is completely irrelevant to the quality of black and white cinema, and the same idea also applies to silent cinema in relation to sound. And while a work of art should be judged independently of its author’s intent, the author’s intent is still the most vital part of the creative process and cannot be completely disregarded when assessing the work.

Chaplin’s updated sound version of The Gold Rush (1925) is a good example. While most of Chaplin’s changes to the film are positive ones (the romantic subplot feels much less mean-spirited in the altered version, for example), the actual addition of Chaplin’s narration is completely unnecessary. It covers more than just the film’s intertitles, and it often comes off as Chaplin explaining the jokes, making them less funny in the process. Chaplin was one of the most successful filmmakers in terms of transitioning from silent to sound cinema (artistically, if not commercially), but that’s because he made his sound films with sound in mind. The Gold Rush, on the other hand, was a silent film with sound tacked on later purely for the purpose of reigniting public interest in the film, and while it succeeded in that regard, the addition of sound harmed the film from an artistic standpoint.

The matter of artist’s intent becomes even more relevant when it comes to silent films made during the Sound Era. While I couldn’t say whether Carl Dreyer would have been able to film The Passion of Joan of Arc (1928) with sound if he had wanted to, he directed the film after sound had entered the world of cinema, and he even doubled down on the film’s silence; he apparently never encountered a score of which he approved following the film’s release. This is an excellent example of a thorough disregard for sound in any stage of the filmmaking process, even at the point at which the audience experiences the finished product. While virtually every person who saw the film would have seen it with musical accompaniment, sound simply wasn’t a concern for the director. The film’s lack of sound draws more attention to the visual performances, which are clearly a heavy focus given the film’s emphasis on close-ups. These alone cemented the legendary status of Maria Falconetti’s performance, even though she has no audible dialogue in the film. Modern filmmakers have control over a film’s soundtrack; this was also the case with The Passion of Joan of Arc, and for all intents and purposes, the soundtrack that Dreyer chose was silence. Saying that lack of sound is purely a hindrance denies the deliberate creation of the filmmaker.

Not only is the limitation of silence integral to silent films, the greatest silent films actually derive their brilliance from this limitation. The lack of sound drives filmmakers to place additional emphasis on the film’s imagery, funneling all of a film’s impact and staying power into the visual element. While sound films are able to strike a balance with their impactful elements between sound and vision, in silent cinema the visuals are the sole method of conveying these elements, lending them a powerless common in dramatic sound films. Even traditional dramatic silent films receive this less naturalistic treatment, which emphasizes a certain unreality to convey story and themes. This approach provides more fantastical possibilities, even in drama films, accompanying a relatively grounded and serious story. Because of that exaggerated fantastical element, the silent drama is often melodrama, which isn’t a bad thing. It’s simply an alternative method of displaying emotion that works particularly well in silent cinema. The German Expressionists made excellent use of striking visuals to convey theme and emotion, but filmmakers accomplished it in various ways around the world: the horses galloping through the sky in Sjöström’s The Wind (1928); the army of the wrathful dead in Gance’s J’accuse (1919) (which loses a significant portion of its energy and pathos in Gance’s sound remake); the kinetic energy of the editing in Vertov’s Man With a Movie Camera (1929); and the pure physicality in the comedies of Chaplin, Keaton, and Lloyd. All of the great silent filmmakers found ways to express themselves visually, often outside the realm of reality, partially as a result of their films’ lack of sound. From special effects to overacting, many silent films feature an exuberance in the unabashed explicitness of their conveyance of theme that serves as a compelling substitute for the more naturalistic possibilities provided by sound.

I’d like to clarify that this drifting away from visual exaggeration in the Sound Era applies mostly to more serious dramatic films, the purpose of which is to present their stories in a relatively realistic fashion – a purpose naturally aided by the addition of sound. The primary strength of the silent film that I’m describing here is the unrealistic approach it takes to realistic matters, which would be mostly lost by the 1930s. Obviously, the more surreal elements of cinema remained in films that are inherently unrealistic in terms of story, such as fantasy and horror films.

I’d also like to reiterate that this is in no way an attack on sound cinema; on the contrary, the introduction of sound opened countless possibilities to be explored, and it was inevitable that silent cinema would fall by the wayside in light of this immense technological advancement. The use of sound does not categorically destroy the possibilities and methods that the Silent Era brought to the forefront; it simply means that the influx of new alternative methods obscured the old ones. As I mentioned previously, this shift away from more surreal visual elements is seen primarily in more serious drama films, rather than in genre films where exaggeration is more common (see The Wizard of Oz (1939), the fantasy films of Cocteau, or the Universal horror films). That said, there are plenty of dramatic sound films that do an excellent job of following in the footsteps of visually melodramatic silent films: The Red Shoes (1948) with its dreamlike ballet sequence; Ordet (1955) with its miraculous resurrection; Jean’s underwater vision in L’Atalante (1934); The Night of the Hunter (1955)’s expressionist sets and lighting. These films show that the melodramatic approach of silent films can, and often do, work, even in sound films.

It’s undeniable that the lack of sound in films produced in the 1920s is indeed a limitation relative to the possibilities opened up by later technical advancements, but silent films have merit in themselves, as the lack of sound allowed them to use a different cinematic language that is in no way inferior to those that came later. Silent films aren’t just relics of the past, valuable only as a glimpse into the early days of cinema. Many silent films are easily comparable in technique, quality, and artistic vision to the best that sound cinema has to offer, and we owe them just as much love as their more vocal successors. 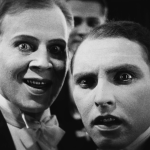 4 thoughts on “The Art of Silent Cinema”